This amazing wooden railway set includes everything needed for budding train enthusiasts: a spacious roundhouse engine shed, dozens of curved and straight track pieces, trees, workers, and traffic signs; multi-piece trains; magnetic-tipped cranes; switches and a T-junction for changing course; and a suspension bridge, trestle bridge, and roundtable, too! With more than 132 pieces, this set offers tremendous value! Mix and match with other train sets—it’s compatible with all popular wooden railway systems. Our Wooden Railway Set includes a 6-piece freight train with cargo, a 4-piece passenger train, and a 3-piece flatbed truck with cargo. Kids can create up to 4 track configurations, enjoying hours of screen-free play. The Wooden Railway set makes a great gift for kids ages 3 years and up. This train tracks playset measures 17” H x 5” W x 28” L and weighs 17.1 pounds. 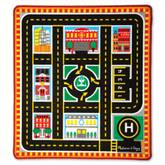 This colorful play rug comes with four rescue vehicles ready to swoop in whenever there's an emergency! Big enough for trains, chunky play figures, and vehicles of all kinds, the woven rug features a cityscape complete with hospital, fire station, helipad, police station, apartment buildings, and more, all conveniently connected by a two-lane road. Durably made to look great for countless playtimes to come, this rug lays a clear path to imagination!

It’s time to get constructive fun rolling with these sturdy wooden vehicles The eight-piece set includes a steam roller, cement mixer, forklift, dump truck, front loader, crane, and backhoe, each approximately four inches long, and a construction piece to lift and load. All are brightly colored with lots of moving parts that are fun for kids three and older to grasp and maneuver. 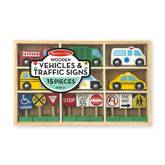 Six wooden vehicles and nine familiar signs furnish a world of travel and pretend-play fun! Car-loving kids will find everything they need to set up a busy street or add to train sets and blocks: The set includes emergency vehicles, a school bus, a taxi, garbage truck and nine brightly painted traffic signs for imaginative play. The included play extensions suggest skill-building activities to improve vocabulary and sorting, too. All 15 pieces store neatly in the compartmentalized wooden box when playtime is over. 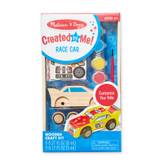 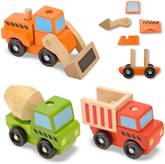 Always prepared for a hard day’s work, these three chunky, wooden construction vehicles, packaged as a set, include a bulldozer, a dump truck and a cement mixer. Each vehicle has a free wheeling base and is constructed of solid wood stacking parts. The fun is endless, as they can be taken apart and rebuilt again and again!

This giant hauler comes stocked with six unique cars and unlimited play possibilities! Lower the upper deck to let the fleet of race cars roll off of the truck and race around - kids will be building motor skills as they play. With a variety of colors, designs, and numbers on the sides, they'll naturally be sorting, sequencing, and grouping, as well, building important cognitive skills too. But ask any kid what's so great about this big truck full of race cars and they'll give you an even better answer: It's huge (2.5 feet when extended) and super cool! The Mega Race Car Carrier makes an ideal gift for kids ages 3 to 7. 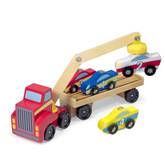 This big red rig has a magnetic arm that can reach every car on its trailer! It's one terrific wooden vehicle set with so much to offer: Link up the trailer to the car carrier to take the four magnet-topped cars for a drive, then unload each one at its destination. Sort and sequence the wooden cars--each one has a unique color, stripe, and number to inspire playful counting, sorting, and sequencing activities. Then load the cars again and roll out! Car- and truck-loving kids will love discovering endless play possibilities as they roll this wooden truck toy all around the house and to the ends of their imaginations. The tough vehicles have sturdy wooden chassis and smooth-rolling wheels, so they'll stand up to countless deliveries and road trips. And maneuvering the articulated arm is easy to do, great for fine motor skills and hand-eye coordination, and so much fun! 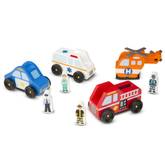 Race to the rescue with this collection of four wooden emergency vehicles! Sturdy wooden construction and moving parts on each vehicle means the ambulance, rescue helicopter, police car, and fire engine will stand up to endless of hours of hands-on play. Wooden emergency worker play figures fit into each of the vehicles and can also be removed for additional imaginative play opportunities.

This all-in-one service station is truly full service! Park the two included wooden cars in the parking garage with movable elevator or pull them through the car wash. Don't forget to fill up at the gas pump before getting the cars serviced at the garage with sliding doors. This play set for ages 3+ encourages fine motor skills, hand-eye coordination, problem solving, and imaginative play. The built-in handle makes it the ideal take-along toy! This Melissa & Doug wooden car set for kids includes an elevator that moves up and down to bring cars to upper parking area, a parking booth gate that lifts and lowers, and a platform that slides through the car wash. The play car wash and service station has a sign at the top that doubles as a built-in carrying handle. It’s a fun-to-play-with set that encourages fine motor skills, hand-eye coordination, problem solving, and imaginative play. This Service Station Parking Garage is a great gift for kids ages 3 to 6.

Race to the rescue, around the track, or all over town with these sturdy wooden cars! The nine-piece set includes cars, racecars, mini-van, police car, and taxi, each approximately four inches long. All are brightly colored, easy to identify, and fun for kids three and older to grasp and maneuver. Designed to play perfectly with Melissa & Doug Activity Rugs, the vehicles store conveniently or can be displayed in the compartmentalized wooden tray. 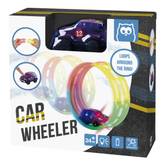 This racing loop and its acrobat car, driven by a powerful recoil and advance engine, will make the little one spend some evenings of the most entertaining and fun. Once the hoop has been built with the four pieces that make it up, the car can easily turn around at an impressive speed. Ideal to encourage imagination and creativity! Age: From 2 years old.

- Tighten the hood of the car to turn on the lights.
- Requires 3 AAA batteries.
- Easy assembly and disassembly.

Live an off-road experience driving this fast Fast Buggy! The car contains shock absorbers to make your route easier on uneven terrain. In addition, it includes a remote control of 2.4Hz for a control range of 30m. With Fast Buggy your little one will live great adventures!

- Transmitter and receiver: 2.4 GHz.
- For exterior and interior.
- Reaches more than 30 meters of range.
- Address advance control.
- Off-Road tires.
- Rear and front cushioning.
- Total suspension.
- The product requires 6 1.5V AA batteries (not included).
- Do not touch the antenna while playing or the control distance of the vehicle will be affected.
- Change the batteries if the power decreases.
- Keep the toy away from direct heat.
- Do not immerse the toy in water.

What a car pass! With this super set, the little ones can create their own circuits and run the car. It is a plastic circuit, removable with 129 pieces! With this fantastic game, the kids will be able to race even with the light off. Age: From 3 years old. 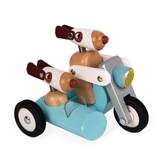 Spirit is a lovely range of lacquered solid wood vehicles. Featuring its own  inimitable style and French design, it is sure to please children young and old! A wooden dog side-car with gloss paint and rubber wheels. Wood : Chinese  cherry. Lacquer painting. Window box. 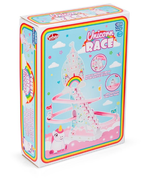 Re-imagined version of the classic Penguin Race novelty with a striking unicorn design. Switch it on and the small unicorn figures will automatically ascend the staircase towards the slide. When they reach the top, each unicorn will then descend along the winding path, completing a circuit that leads them through an arch in the centre of the unit before they finish at the foot of the stairs, ready to repeat the process. This set includes three unicorns, each with a different coloured mane. Requires 3 x AA batteries.| 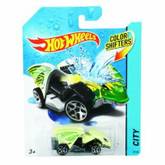 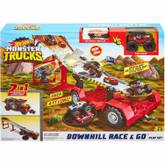 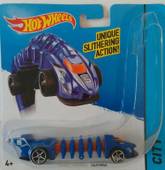 HOT WHEELS MUTANT MACHINES FLEXFORCE
THE RESULT OF A FAILED LAB EXPERIMENT. THESE 1/2 CREATURE, 1/2 VEHICLE MACHINES LURK UNDERGROUND WAITING FOR THEIR CHANCE TO TAKE OVER THE WORLD!
https://magrudy-assets.storage.googleapis.com/746775278038.jpg
https://magrudy.com/product/hw-mutants-city-theme-mutant-machines-ve-746775278038/
10.02 USD

Schleich Carnotaurus Figure
Carnotaurus is a carnivorous predatory dinosaur from the Upper Cretaceous. It lived approximately 70 million years ago. The only specimen ever found was excavated in Argentina. The Carnotaurus had a length of 9 metres and an estimated weight of 1.5 to 2 tons. His jaw was more rounded than that of his relatives, and his teeth looked like bended knife blades. Surely it was one of the most dangerous predators of its time.
https://magrudy-assets.storage.googleapis.com/4005086145276.jpg
https://magrudy.com/product/14527carnotaurus-4005086145276/
25.46 USD

Schleich Tyrannosaurus Rex
The thirteen metre long Tyrannosaurus Rex was a two legged predatory dinosaur. With its powerful head and nearly 20 centimetre long teeth, this dinosaur was an extremely impressive contemporary. Although the Tyrannosaurus Rex looked quite threatening, it could hardly use its front legs armed with just two claws since they did not even reach his mouth. Nearly seven metres tall and thirteen metres long, the Tyrannosaurus Rex was probably not a very skilled hunter, but rather a scavenger which probably fed on the leavings of other animals. It had more than fifty teeth measuring more than 15 centimetres in length which it used not for chewing but rather for tearing, since it swallowed its food in large chunks. To improve depth-perception when searching for food, the eyes of the Tyrannosaurus Rex were oriented toward the front such that the fields of vision of both eyes overlapped.
https://magrudy-assets.storage.googleapis.com/4005086145252.jpg
https://magrudy.com/product/14525-tyrannosaurus-rex-4005086145252/
34.05 USD

MAN Tip up truck
A working dump truck for pretend play indoors or out! Tilt the cab forward to reveal a detailed replica of the engine, or incline the bed and snap it into place in an upright position. Features real tread tires, folding mirrors and a back gate that opens.
https://magrudy-assets.storage.googleapis.com/4001702027650.jpg
https://magrudy.com/product/02765-man-tip-up-truck-4001702027650/
54.08 USD

The LEGO® DUPLO® All-In-One Box of Fun Set has a whole load of DUPLO bricks for fun building and rebuilding for creative play. At its heart is a buildable wagon base with rounded edges and wheels that really turn. This comprehensive set also includes 2 opening window elements, a cute dog and numbered bricks with corresponding decorated bricks to help your child develop their counting skills. There are even extra classic DUPLO bricks for more creative fun.